O'Hare International airport, positioned only 17 miles northwest of the downtown Chicago area, was rated the best airport in North American nine years in a row. It provides a greater number of connections to a greater number of locations at more frequent intervals than any airport the world over. Over 76 million travelers passed through O'Hare International Airport in 2006. The airport services 60 foreign destinations, making it one of the strongest in international presence. It is also the second busiest airport in not only the United States, but the world as well.

As if the airport's current facilities weren't impressive enough, O'Hare International Airport is undergoing a $6 billion modernization program, which will straighten the airport's overlapping runways to resemble a parallel configuration, thereby decreasing the number of delays by 79 percent and improving the airfield's capacity by 60 percent. The modernization program will benefit the airport with additional revenue, customers with reduced airfares and the surrounding community with extra jobs. Students that graduate from Westwood College’s business, technology or other Chicago program will have an obvious edge when vying for those positions.

You may worry that attending Westwood's O'Hare Airport college could prove distracting, being so close to a noisy airport. You can dismiss those concerns. The Chicago Airport System has a Community Noise Resource Center devoted specifically to creating programs that protect citizens from airport-produced noise pollution. Airports in Chicago use noise abatement flight processes, such as choosing routes over scarcely populated areas, to reduce the loud sound of planes in nearby communities.

Learn more on how to earn a degree or diploma quickly at a reputable Illinois College. It’s possible to earn your diploma in just one year, associate degree in 20 months and bachelor’s degree in only three years! Complete this form or call 877.852.6608 today to learn more.

The Westwood College – O’Hare Airport campus is accredited by the Accrediting Council for Independent Colleges and Schools (ACICS).

Take the first step toward your career 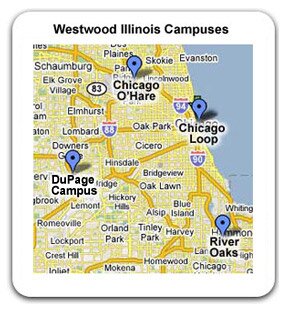